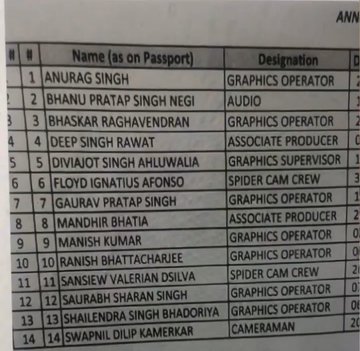 The cricket fans in Pakistan are aggressive at Pakitan Cricket Board for inviting Indians to manage one of the big events in Pakistan PSL 2020( PSL 5) and are blaming it for the disability to head and take control of their own grand openings.

A list came out containing the names of all the Indians to whom PCB gave worthy jobs for handling the authority of the inauguration ceremony of PSL 5. A number of Pakistan showed their anger for giving jobs to Indians instead of Pakistanis and took this to on social media with the hashtag #PCBJawabdo.

Waqar Zaka Pakistani VJ-turned-television host also came out with a video and said that he has been very busy for BOL Champion Season 2 so he didn’t know what is happening in the country, he just came to know few things about PSL 5. He shared a list containing names of Indians who were given important jobs by PCB and said that why these jobs were not given to the deserving people of Pakistan. He questions the Government of Pakistan for inviting these people and inquires if they had forgotten what is happening in Kashmir and adds that now PCB will cover by saying that this is the policy of few channels…He asked, Is this policy only for Pakistani Artists…how these Indians treat Pakistani artists so badly and cut their even their small scenes and songs So if PSL 5 is taking place completely in Pakistan this time why not jobs are given completely to Pakistani people?

Wakar Zaka says that there is no hatred and jealousy for Indians but the problem is if they are treating our artists so bad them why should we hire their artists in Pakistan.

A number of Pakistanis came out and supported Wakar Zaka on the matter with the hashtag #PCBJawabDo. More than 130+ Indians have been hired for the management of the opening ceremony of PSL 2020. Here are some reactions by Pakistanis which you need to see.

PSL 2020 opening ceremony hanged down badly and was regret for Pakistani cricket fans as hiring Indians for the organization of such a big event is a what a pity and a slap on the face of Pakistanis who could have been called for the important jobs.