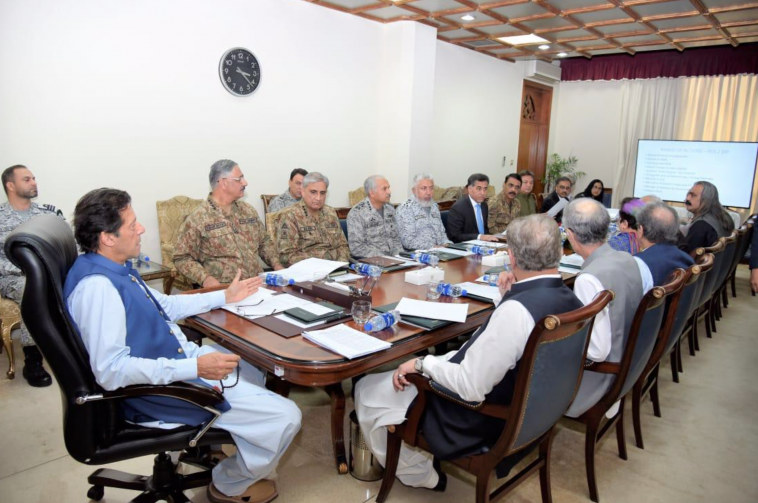 “Prime Minister Imran Khan has directed that all diplomatic channels be activated to expose brutal Indian racist regime, design, and human rights infringements,” a verbal expression issued after the meeting verbally expressed. The premier additionally directed the armed forces to perpetuate their vigilance, as per the handout.

National Security Committee (NSC) meeting was attended by the top civilian and Military Leadership in which The Committee decided to take the following actions:

1- Downgrading of diplomatic relations with India.
2- Suspension of bilateral trade with India.
3- Review of bilateral arrangements.
4- Matter to be taken to the UN, including the Security Council.
5- 14th of August to be observed in solidarity with brave
Kashmiris. via Govt of Pakistan‏

India’s decision to violate Kashmir’s special status has drawn ire of native Kashmiris, Islamabad and the ecumenical community for infringing international treaties and has taken the matter to United Nation (UN) and Security Council.

Meanwhile, the Pakistan Government has additionally decided to impose a ban on India to obviate it from utilizing its airspace. Pakistan has shut down its airspace for the second time ‘the first one was after Pulwama incident.

On the other side, India has sent thousands of supplemental troops to the region, imposing a curfew on components of it, shutting down telecommunications and internet and apprehending political leaders

India and Pakistan claim Kashmir in full but rule it in part. The nuclear-armed neighbors have fought two of their three wars over the disputed territory.

Saleef Shah is the founder of Pakistan Top Stories, a Pakistani-based, multi-platform media, and entertainment company. That allows users to Discover and Create content on our Easy Frontend Submission.